Saturday.  We ate breakfast at the hotel.  I ate a healthy breakfast: eggs, sausage, whole wheat bread, oatmeal, cornflakes, raisin bran, water, and no juice.  Then we drove to Matthan’s house to get Matthan. On the way to Hollywood I saw a huge violin!  It was painted on a tall building, a skyscraper. My mom thought it might be an advertisement for Los Angeles Symphony Orchestra which reminded me of Missoula Symphony Orchestra concert is coming up in April.  Anyway, we drove to Hollywood.  We hiked up to the Hollywood sign. Well, we could not really hike to the sign like we can hike to the `M’ in Missoula. We could only hike around the sign:  we walked around the back of it and saw the letters but we could not climb on the letters like we can climb on the `M’ on Mount Sentinel. Then we hiked around to the front of the sign so that we could take some pictures. Again, we could not get very close: Matthan said that he had tried to get closer when he had visited with a friend but a helicopter and seen them and shouted down to him and his friend to get out now! We saw lots of helicopters flying around so we decided to follow the `No Tresspassing’ signs. Silly Matthan for even trying!

We ate at the restaurant. I had salad and a waffle with fruit. Then we walked around Hollywood and I saw:  Batman, Jack Sparrow, Spiderman, Princess Leah. It was funny. I also saw stars on the sidewalk and hand prints and foot prints. I did not think it was that big of a deal but it was very crowded with lots and lots of people around. We were tired so we decided to walk back to the car on a quiet, boring, Hollywood street. Before we went back to Matthan’s house, we went grocery shopping. My mom asked where the bathroom was and the employee said:  `just follow the yellow brick road.’  And so we did! We saw the Wicked Witch of the West, Dorothy, the Tin Man, the Scarecrow and the Lion all on the way to the bathroom. It was funny! My mom said that we must still be in Hollywood for such a crazy way to get to the bathrooms! 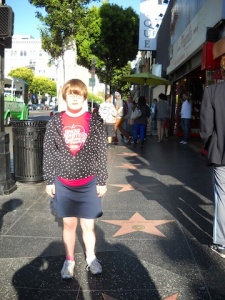 Sunday.  We packed up the car and checked out of the hotel.  Then we picked up Matthan and his friend Kyle and we all went to Matthan’s church for Easter Service. After church Matthan made us a big brunch with pancakes and Easter Egg Lasagna. It was delicious! Mom and dad brought Uncle Jeff from the airport and we hung out at Matthan’s house while he and my mom fixed the drain in the kitchen—it had gotten all clogged up with Easter eggshells. What a mess—-what a pretty mess because of all the pretty colors of the eggshells.  It was raining so we decided to go to a movie instead of going to the beach. Last year my mom made us drive to the beach in the rain, park the car, run to the beach just to take a picture of me with Matthan at the beach. Crazy mom.  This year she was reasonable and took us all to a movie that Matthan wanted to see, A Place Beyond the Pines. It was sad.

We said `goodbye’ to Matthan and then we drove to Anaheim to be close to Disneyland for the next day. That’s all for tonight;  tomorrow I will write about Disneyland.

Hanging out at Matthan’s house.

Mathalia graduated from Big Sky High School in Missoula, Montana on June 1, 2013. She was born with Down Syndrome which is certainly part of who she is but it has not stopped her from embracing her life. Click the picture for more!